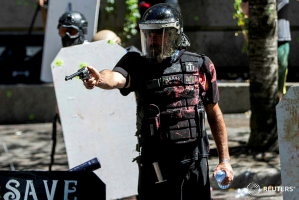 “The year was quite active for the far right in the United States, especially after its relative downturn in 2019 as a violent street movement — at least compared to the recent past. Although the far right may not have committed as many high-profile massacres as previous years, 2020 saw more murders and car attacks at demonstrations than any year in recent memory.

While the openly fascist wing of the “alt-right” continued to implode over the past year, some on the far right picked up steam: the Boogaloo movement — a new grouping of younger activists with militia-style politics, but the look and feel of the alt-right; Gropyers — white nationalists and their allies who are trying to influence the Trumpist movement from inside; and followers of the QAnon conspiracy theory, who believe Trump is always about to arrest a cabal of liberal, deep state, satanic pedophiles. Moreover, aggressive street demonstrations led by the Proud Boys reached a fever pitch, inspired by comments from Donald Trump, and renewed opposition to the revived Black Lives Matter (BLM) movement.”