Here’s my analysis of the protests and who Trump’s scapegoating of antifa plays into it. The U.S. Right is deeply afraid of is the growing, multi-racial rebellion against the white supremacist system. As the revolt spreads into small towns and even conservative areas, politicians and police chiefs are worried not just of losing control of the streets – but of their political legitimacy altogether.

“The year 2020 has been filled with wild plot twists, from the Coronavirus pandemic to a national uprising against white supremacy in the United States.

One of the strangest twists has been the anti-fascist movement being thrust back into the spotlight.

This is because President Donald Trump has scapegoated Antifa and anarchists for fomenting what is, in reality, a spontaneous-but-African American-led rebellion against white supremacist policing, the likes of which the country has not seen in decades. 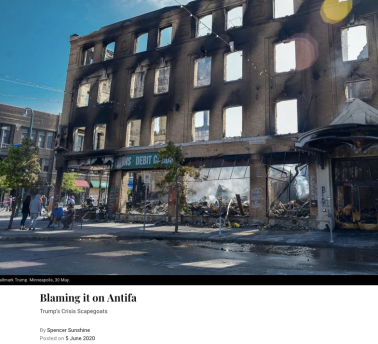 The rebellion is so powerful it is approaching the riots that rocked American cities in the 1960s.

In the last week, Trump has taken to blaming “Antifa” and “anarchists” for the violence and looting. This is actually occurring, albeit on a much smaller scale than the right-wing media portrays.

While activists from both movements are involved in the protests, overall they are rather minor players. If these activists were removed from the streets, the protests would look essentially the same.”

Read the full article at The Battleground.eu