Since its launch in June 2019, Timber Unity has become a major political force in Oregon, with many on the right looking to it as the future of conservative politics in the state, and the GOP has eagerly embraced it. But Timber Unity wildly misrepresents itself as having mainstream politics. From its inception, it has attracted a range of Far Right supporters who are visible and vocal in the movement. Timber Unity rallies have repeatedly included militias, QAnon followers, advocates of “Constitutional Sheriffs,” anti-vaxxers, and Islamophobes.

END_OF_DOCUMENT_TOKEN_TO_BE_REPLACED

I have a new piece up at Truthout, roleplaying the possibility of Trump trying to serve more than two terms. At what point would he actually attempt this, and what might happen in response?

“Donald Trump’s contempt for democracy and open sympathy for authoritarianism are visible in his recent comments about serving longer than he is legally allowed to. On June 16, 2019, he tweeted that his supporters might “demand that I stay longer” than two terms.

In fact, Trump has variously suggested that he should get two extra years as a consolation prize for the Russia investigation, that he will serve up to five terms, and that he will indeed only serve two…..

Some have responded to Trump’s latest statements on term limits by speculating about his mental state or making comparisons to Hitler. A more interesting approach might be to role-play several scenarios in which Trump actually does try to unconstitutionally break the term limits. These scenarios, of course, are a game of speculation, but they are instructive: Given the unpredictability of the Trump presidency and its anti-democratic actions thus far, it’s important to consider what ‘staying longer’ would truly entail.” 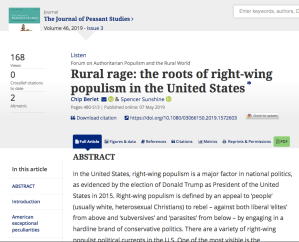 I have a new peer-reviewed journal article (my first!), which I co-authored with Chip Berlet: “Rural Rage: The Roots of Right-Wing Populism in the United States.” This analysis of the U.S. Patriot movement is part of the “Forum on Authoritarian Populism and the Rural World” published by the Journal of Peasant Studies. It includes 243 endnotes, if that’s your kinda thing.

I did a short interview with Its Going Down about the meaning of the Christchurch massacre and how we should respond.

“IGD: What are the main takeaways from the massacre in New Zealand?

Spencer Sunshine: Unfortunately these attacks are depressingly common, but here are some thoughts:

1) While our hearts go out to New Zealand’s Muslim community, we shouldn’t look at this as not just targeting them—just as we can’t look at the 2018 Pittsburgh massacre as just targeting Jews or 2015 Charleston massacre as only targeting the black community. Nazis and other White Nationalists target a huge range of people, including: black folks and all other people of color; religious minorities, including Muslims & Sikhs; both religious and secular Jews; feminists; immigrants and refugees; Communists, socialists, and anarchists; antifascists; LGBTQ people; interracial couples—as well as anyone who stands in their way or stands up to them, including white, Christian, cis-het men. They are at war with almost everybody in our communities. Here, truly, and injury to one is an injury to all.”

Read the entire interview at It’s Going Down

I have a short piece about the racist mob attacks in Chemnitz, Germany; the similarities between the Alt Lite and the German Islamophobic party AfD; and what this may mean for the U.S.

“A sudden surge of anti-immigrant mob attacks in eastern Germany has renewed fears of another wave of xenophobic violence like the one that swept the country in the early 1990s. The most recent spate of violence began on August 26, after the arrest of two men—one from Iraq and one from Syria—following a murder of a 35-year-old man during a street festival in the city of Chemnitz caused an angry right-wing mob of 1,000 to rampage through the city, hunting down and attacking foreigners. The next day, 6,000 people gathered for a second far-right march, giving Hitler salutes and chanting anti-immigrant slogans, and overwhelmed police.”

MoveOn gave me a couple minutes to explain what the Far Right believes — and how we can organize against it.

Afterward, Gavin McInnes seems to have ordered his keyboard kommandos to harass me. You can really tell what’s on the Alt Right’s mind by their comments: Jews, people’s body size, and violence. Pretty funny overall.

The talk is about 40 minutes long, and the Q&A goes on for an hour. 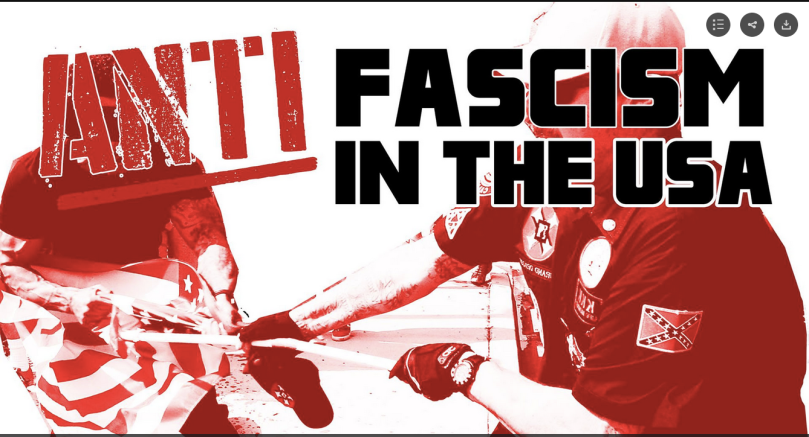 An 40 minute audio recording of my talk “Anti/Fascism in the USA,” recorded in Montreal in April 2017, is now online. I cover how Trump’s presidential campaign energized white nationalists; the question of “Is Trump a fascist?”; the Trump administration’s appointees and their connections to white nationalist and right-wing populist politics; the rise in hate crimes; a detailed overview of the different fascist and white nationalist factions, including the Alt Right; and the re-emergence of the militant antifascist movement.

Listen to it on Submedia.

“I have been following Far Right movements for more than a decade as a researcher and journalist. Over the past few months, I’ve seen an increase in the visibility of a new, violent, right-wing street protest movement that I call “Independent Trumpism.” It unites neo-Nazis, members of the alt-right, Patriot movement paramilitaries and Trumpist Republicans.

Two things set Independent Trumpism apart from usual right-wing politics. First, the group’s rallies are in support of the president, but are organized outside of the Republican Party structure. Second, mainstream Republicans are appearing alongside open White supremacists, especially at events billed as “Free Speech” marches.

Independent Trumpists will hit the streets tomorrow (June 10) for a national March Against Sharia, organized by the large anti-Islam group ACT America. Saturday’s events are expected to draw thousands of people in 28 cities, in 20 states. Here is a six-month chronology of major Independent Trumpist moments that led to this one:

January 20, 2017: Alt-Right Violence at the University of Washington in Seattle
A University of Washington talk by Milo Yiannopoulos—the notorious Twitter troll, ardent Trump supporter and former Breitbart editor credited with mainstreaming the alt-right—draws a large protest. A married couple, Marc and Elizabeth Hokoana, come to the event armed with pepper spray and a handgun to antagonize opponents. After protester Joshua Dukes confronts Marc about using the pepper spray, Elizabeth allegedly fires a single round into his stomach.”

Read the rest at Colorlines

Back to top
Spencer Sunshine
Blog at WordPress.com.
Loading Comments...